“Why is measuring the digital economy so difficult when everything is stored as data?”

“Why is measuring the digital economy so difficult when everything is stored as data?”

This brief write up of the seminar (full seminar here) presented by David Nguyen of ESCoE and NIESR at the Office of National Statistics London office on 14th January 2020 was prepared by Tony Dent of the Campaign for Better Business Statistics.

Although well attended by ONS staff employed in the London Office, there were relatively few persons braving the stormy weather to attend this important presentation. Fortunately David Nguyen’s wide ranging review of the major issues affecting accurate measurement of the modern economy is now available on video, as indicated below.

It is therefore irrelevant for me to repeat the details here. Nevertheless I replicate below David’s observational chart overlaying the growth of Facebook since 2007 onto the well-known “what has happened with productivity” chart! 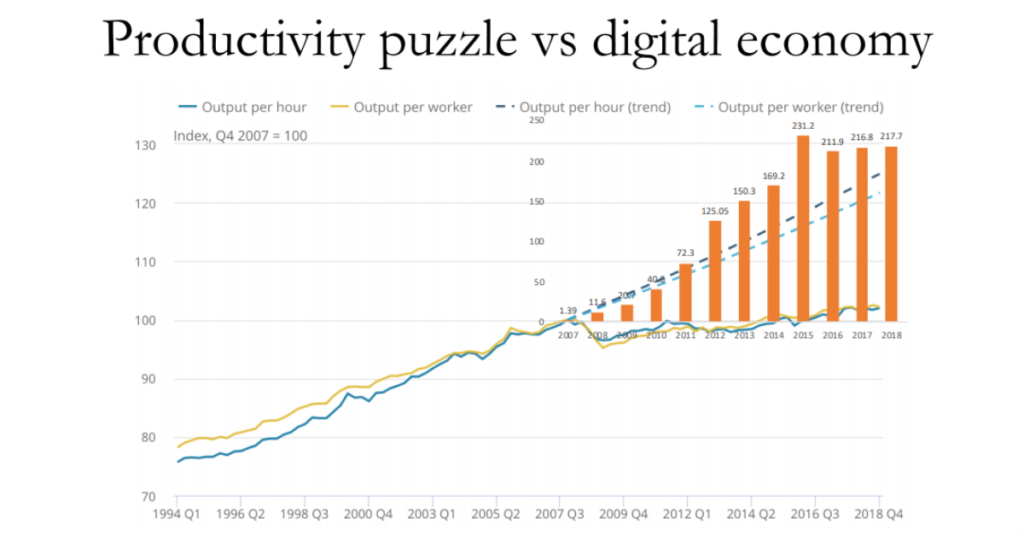 Necessarily, David was not drawing any conclusion from this chart, rather as with the remainder of his talk the purpose was to observe various details which all needed to be considered before effective conclusions can be drawn. Mind you, as someone who has frequently claimed that the introduction of social media has had a negative effect on productivity I feel free to believe there is an influence!

Beyond that I was personally impressed by the claim by one audience member that all productive enterprise in the UK was now part of the digital economy. A claim that is almost certainly false but contra examples that I am able to identify are, indeed, relatively trivial. Personally, I consider that those elements of the traditional economy that have now become digitalised remains measured by traditional methods and therefore the primary difficulty rests with the gig economy and other more recent developments within the sector David refers to as Information, Communications and Technology.

There was, of course, much food for thought from David’s talk, with my own primary observation being concerned with the effect on the increasing availability of free digital goods on both productivity and the Gross Domestic Product. Here David’s talk was right up to the minute with the reference to Brynjolfsson, Collis, Diewert, Eggers and Fox, whose abstract on the subject of “Measuring the Impact of Free Goods on Real Household Consumption” was only released on 10th January (see here for abstract).

We at the campaign for better business statistics (aka UKPLC) intend to explore the usage and perceived value of free goods as part of our major consumer study scheduled for this spring. That study follows from the trial work conducted last Autumn as reported here.

Share
Previous PostThe Good, the Bad and the Ugly
Next PostTough conditions for small businesses?