The chancellor announces help for UK business – but is it enough?

The chancellor announces help for UK business – but is it enough?

This document provides a commentary on the scenario[1] recently published by the OBR, being their assessment of the likely cost to the Treasury of the effects of the Covid-19 outbreak and the measures taken by the government to control it.

The opinions expressed in this document are entirely my own and are primarily based upon my interpretation of some original research conducted amongst various businesses in the UK, together with information provided by the Office of National Statistics and other research reports.

Overall, I consider that the OBR may have underestimate the GDP ‘hit’ for Q2 2020 by 8%, being the difference between my own estimate of a 43% decline in UK GDP for the quarter compared with the 35% decline in the OBR scenario.

It also appears that the OBR has not accounted for the impact of Coronavirus on GDP in the first quarter, which I estimate will already have declined by at least 5%.  The pandemic, the media coverage about the potential impact and the official narratives of governments across the world were already affecting attendance at work, supply chains, customer behaviour and the markets before the official UK lockdown in the final week of the quarter.

Rather more seriously, I feel that the OBR expectation for a quick bounce back is unduly optimistic and that it will take considerably longer to achieve a return to the levels of wealth we were experiencing.

On a lighter note there is no better time to redefine society’s economic goals and I suggest that greater attention is paid towards a fairer distribution of wealth than has hitherto been the case!

The remainder of this document provides a brief comment on each one of the tables and charts as prepared by the OBR to support their scenario.  They can be viewed in the Excel file

I consider the similarity of outcomes from country to country as suggested by the OECD is predictable but was probably suggested a little too early!  Personally, I think INSEE and the OBR are easily the closest to the eventual outcome but both are underestimating in my opinion.

I disagree with quite a lot of the details on these charts, but I consider the issues to be academic at this point.

Output losses by sector in the second quarter of 2020

I have suggested some revisions to the figures for the losses as given in the OBR scenario.  In fact this exercise resulted in a smaller difference on the second quarter GDP than I had originally anticipated (-43% of GDP compared with OBR estimate of  -35%). My reasons for each of the differences are given below.

Mining, energy and water supply is reduced by a further 10% in our scenario, partly because of a lower manufacturing figure resulting in less use of energy and water but also reduced transport usage affecting the oil industry.

Our scenario has Manufacturing down by a further 5% from 55% to 60%, despite the fact that our UKPLC research on manufacturing provided an initial estimate that 48% of manufacturing companies were closed and 52% remained working.  However, they have faced increasing difficulties including lost orders, supply problems, absence through illness and inefficiencies generated by the need for social distancing so production has declined significantly even for those working.

I feel that the OBR has simply underestimated the effect on Construction unless we see an early return to work which seems unlikely.

I consider the effect on wholesale retail and motor trades is significantly higher than the 50% proposed by the OBR – I estimate a loss of 65% with the closure of most retail establishments.

Agreed on transport and storage – losses in many areas due to the decline in passenger movements will have been picked up by increased traffic growth in distribution of healthcare products and home deliveries.

I think the effect on accommodation and food services has been greater that 85% – suggested 92%.

Information and communication has been boosted by products such as Zoom and other IT solutions used by people and businesses.  I therefore estimate a lower decline -35% instead of -45%.

Financial and Insurance services – I believe that even this sector will take a relatively large dip, as large as -15%.  The reasoning being that there will be heavy insurance losses during this quarter and banks and other institutions will be forced to reduce their margins whilst working relatively inefficiently with staff working from home.

I even consider that there will be a relatively large hit on Real Estate because I think that property values will decline significantly in the longer term.  Therefore possibly there will be a big ‘hit’ in this current quarter.  However, not being that familiar with the blue book I am surprised to see that this sector accounts for 14% of GDP!

On the other hand the Professional, scientific & technical services sector  is the second area where I consider the ORB may be over estimating the effect of the lock down.  The impetus provided by the search for a vaccine, creating innovative solutions to various shortages and the use of high tech communications is all serving to reduce the effects in this sector.

Business administration & support services, Public administration & defence, Education and Human Health and social activities all remain unchanged from the ORB scenario.  However, as I have said, I am not familiar with the Blue Book but I had understood that there were difficulties in associating the contribution of the National Health Service to GDP.  I also wonder how we might measure the value of the efforts provided by the Armed Forces?

Finally there are other services – a combination of the Arts, Entertainment, recreation and other services.  Since almost all of these activities have had to close I have modified the ORB estimate downwards by a further 30 points.

I fail to understand how we will achieve such a prompt bounce back to the GDP whilst sustaining a relatively low level of unemployment!  Personally I feel that both are optimistic without further stimulus being offered by the Treasury.

Just as the virus is unlikely to have a “cliff edge” departure, the economic tail of slow, uneven and staggered recovery will destroy the potential for any rapid “bounce back”.

I think that the figure for average earnings in 2021 is somewhat optimistic personally and I have a number of other comments but they are largely inconsequential – we can all have some different guesses on the details!

Possibly this is the most important table in the scenario because it summarises the anticipated cost to the Treasury.  I therefore reproduce it overleaf.  The full cost is calculated from the sum of the estimated cost of each individual policy decision announced by the Chancellor to support business and employment through the lock down. 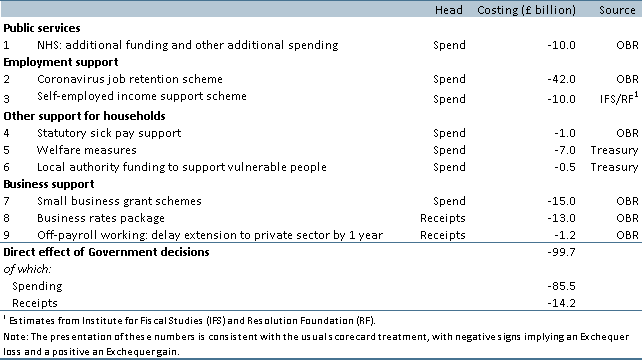 When I first viewed this table I had felt that the furlough cost (Job Retention Scheme) has been over estimated, whereas other aspects may well be underestimated.  On further reflection I now think that each of the individual elements has been underestimated, although not by a great deal and that the cost could be £20 billion higher, due to the estimated GDP loss of 43% compared with 35%.

My concern is less with the outturn for Q2 GDP itself, but with the danger that the loan scheme is inadequate to keep businesses paying their bills and that poor cash flow will have a dramatic and continuing effect on UK business, leading to closures and redundancies.   I therefore feel that the combination of the furlough and business loan schemes will be insufficient to keep businesses operating and therefore unemployment will rise higher than anticipated.  Beyond that factor I also believe that a rapid bounce back will be strongly affected by the decline of international trade which will take a long time to return to ‘normal’ and will require a level of international co-operation beyond what has been evident in recent years.

My primary comments on this table result from the above observations with the associated expectation for higher social security costs and lower payroll tax receipts.  As a result I think there is scope for an emergency budget to put additional purchase taxes on certain goods including petrol whilst the cost is so low.   We should have greater flexibility in this area now we have left the EU.

Necessarily these tables would be different under my expectations.

Appendix: – Analysis of the expected loss to business by the effect of the lockdown on average household expenditure (incidentally, the outcome represents a total of £5 Billion per week).