RPI versus CPIH – what’s your opinion?

RPI versus CPIH – what’s your opinion?

The Campaign for Better Business Statistics responses to the Joint UKSA / Treasury consultation on RPI methodology.

The Campaign for Better Business Statistics grew out of dissatisfaction with various aspects of UK business statistics, as provided by the ONS, and the belief that they were failing to capture many of the details of the so-called Gig economy. Our continuing investigation of that belief and the manner in which the ONS has responded to the Bean report, has led to a more general interest in the manner in which the UKSA exercises its responsibilities. In particular, we have been concerned with any matters relating to the economy and consequently consideration of the issues underlying this present consultation exercise.

The consultation poses 8 questions for consideration:

We do not believe that we have sufficient knowledge or expertise to comment on the various matters relating to gilts as mentioned in questions 2 to 4. Also, whilst we are content to assume that the answer to question 1 may be yes, the real question for us is different; namely ‘does it fulfil the requirement to be transparent? To that question the answer must be NO.

We provide below an extract from the recent publication1 comparing the three indices, CPI, CPIH and RPI over the past two years. It will be seen that the measure of the RPI provided for comparison is consistently from 0.5% to 1% above the corresponding figures for either of the CPI or the CPIH. But, these measurements are during a period when inflation has been low. The difference can be said to be that RPI is consistently one third higher than CPIH, implying possibly, that the larger the inflation rate the greater will be the difference. Either way the difference seems to us to be a regular characteristic of the relationship between the RPI and the CPI/CPIH and the proposal to rename the CPIH as the RPI seems likely to create a furore, once people become truly aware of it.

This is likely to be of particular concern to those who presently use one or more of the lower level, supplementary indices which will no longer be available. Such a change may readily be interpreted as a sleight of hand that may fool some of the people some of the time, but is unlikely to fool everyone. 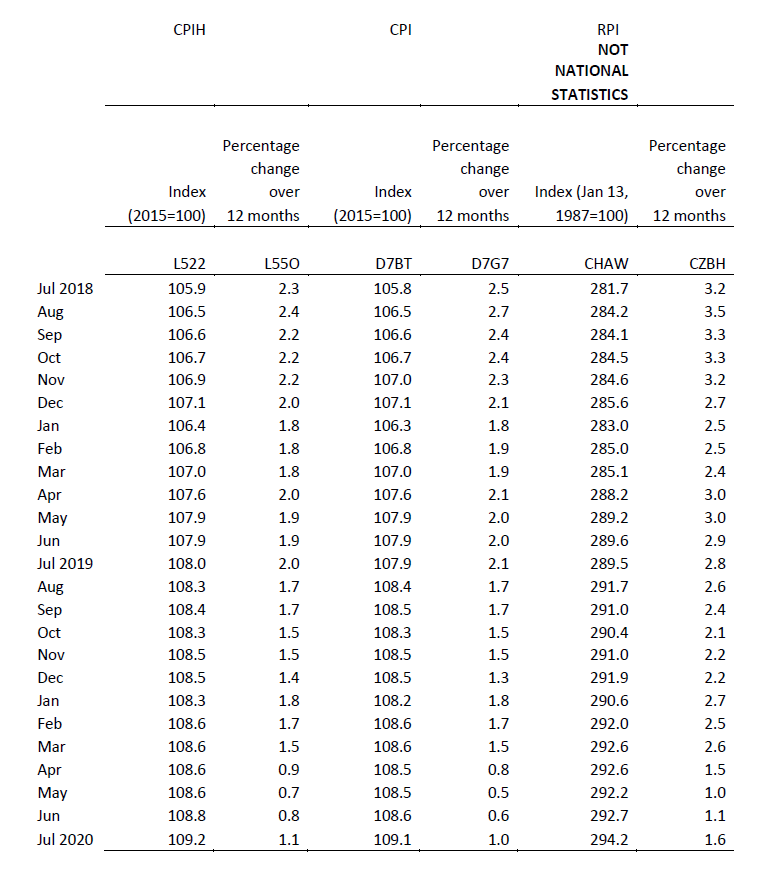 We are conscious that the UKSA has now completed the final year of the strategy underlying the slogan “Better statistics, better decisions” and has embarked on a strategy with the slogan “Statistics that serve the public good”. Frankly, we are doubtful that this proposal will meet either of the implied criteria and our answer to the remaining four questions serve to further emphasise that doubt.

In essence the other four questions are all concerned with important unknowns, as follows:

Rightly or wrongly this implies to us that the Authority and the Treasury have no real notion of the implications that may arise as a result of the proposed changes. Moreover there is no indication of any proper research having been undertaken to address these issues.

This cannot be right. There should be a statistically reliable, independent, study to investigate each of these concerns. It should be designed to be fully representative of UK business and other affected parties (e.g. rail users), to gain a better understanding of the possible implications of this move.

Such a study should include a special survey of those engaged within the financial services sector to glean a wider and more informed opinion on the three questions concerned with gilts. In each case the concern should be to identify the facts in respect of the usage made of the RPI and its subsidiary components and not simply opinions of any change that may be made. At the very least a comprehensive study of this kind will have the benefit of providing the extensive ‘user’ consultation necessary to provide an RPI which satisfies the ideal of a statistic that will ‘serve the public good’. Certainly to proceed as is presently proposed seems fraught with the sort of dangers that have recently affected the A level results.

In summary our position is:

Meanwhile, as a precaution, we would consider it appropriate if the UKSA would take steps to restore the RPI to the status of a National Statistic.